We gratefully accept contributions to Duet, but expect new feature requests and changes to be discussed with Duet Design System team before creating a pull request.

To contribute, you need access to some or all of the following tools:

Before creating a new component, please make sure something similar doesn’t already exist. We follow the below defined process to determine if we should extend an existing component, create a new component, or keep the component application specific instead.

Duet Design System is divided into multiple NPM packages. Development for all of the packages happens inside one mono repository. Follow the below steps to get the dev environment up and running.

All Duet’s packages come with test suites that can be run with npm test inside each package directory. These tests also run automatically on our CI server whenever there’re changes to master or a new pull request is opened.

Sometimes you want to only run tests for a specific component. To do this, run the following command in the components directory, replacing duet-textarea with the name of any component:

Running npm run test in /packages/components/ runs visual regression tests. Each component directory has a sub directory called __image_snapshots__ which hosts the snapshots. When the tests fail for a specific component, we generate __diff_output__ directory under snapshots that highlights the difference and breaking changes much like in the screenshot below.

To run visual regression tests for a specific component and start a watch mode, run the following command in the components directory, replacing duet-textarea with the name of any component:

After the tests complete, you will be presented with a set of actions you can do. The available actions are: 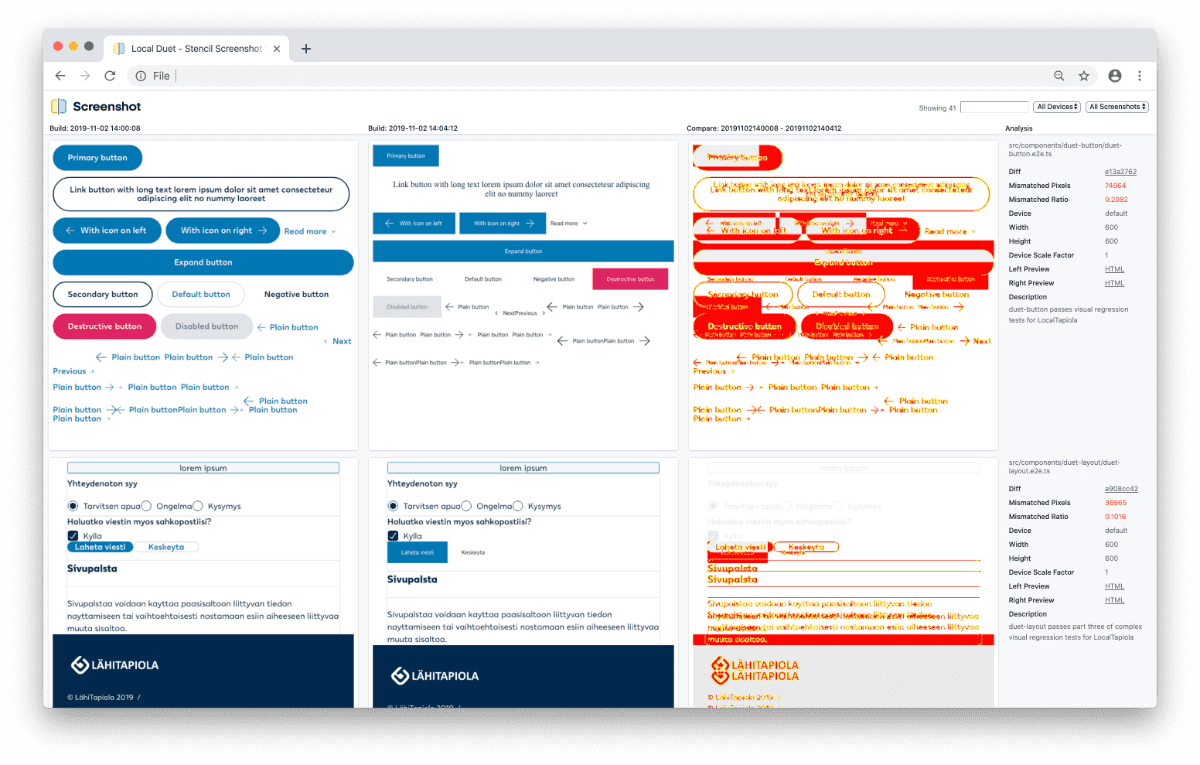 While not recommended for normal workflow, you can skip the tests by running: git push --no-verify.

When working on new components or editing existing ones, make sure to follow our code style guide found under the guidelines section.

With every piece of content we name, we aim to follow these simple rules documented under the guidelines section.

If you have a specific bug fix or contribution in mind, you can generate a pull request in the Duet Git repository. When naming your branch, please follow the below naming convention:

We use Jira to track the backlog, feature requests, and bug reports. If you already have access to Duet’s board you can create an issue under the “Bug reports and feature requests” category by clicking the button below.

If you don’t have access to Jira, please send your feature request or bug report to our support email instead and format the email body according to our issue template.